Recycling isn't always straightforward. What do those numbers on plastics mean? What should I do with that broken refrigerator? How can I dispose this abstract object I can't tell what it is?

On top of that, recycling regulations differ across cities. Did you know some cities allow you to recycle items that other cities prohibit? The same goes for compost. This leads to a lot of incorrectly recycled items, placing unnecessary impact on the environment.

That's where Trash Panda comes in. Using your location and camera, the web app can identify the item you have and specifically point to you if, how, and where to recycle it. Prefer not to use the camera? You can search in Trash Panda's extensive database, which also offers interesting tidbits about your items to recycle. Trash Panda helps you improve your recycling habits so you can rest assured you're doing the environment justice.

My role in Trash Panda

(That's right; despite this site's portfolio of web-based works, I wanted to try something different. There's a lot of different things to learn in the data science field!)

To build Trash Panda's image recognition model, us data scientists first needed to download multiple thousand images of recyclable products. Then, for each and every image, we had to draw a bounding box that labels the exact item we're trying to identify. 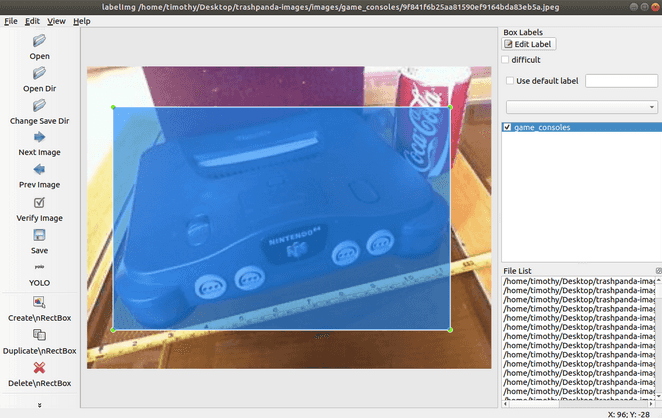 (Example of a bounding box. We want to identify the Nintendo 64, not the soda can.)

Sounds tedious? That's because it is. Thankfully we're computer scientists and know how to automate some things.

Once we got all our images downloaded and labeled, we used YOLO, an object detection neural network, to train our model. In a nutshell, the computer gathers information about what a specific item looks like from each labeled image and tries to generalize what it learned as a math algorithm. The training process requires a large amount of GPU power, and as such, we used a cloud computer, AWS SageMaker, to train the model.

Once the training finished, we got a single weights file that contains all the math algorithms. We deployed this file to a server, which end users utilize to determine the recyclable items in their own images.

If you want to learn more about image recognition, this site explains more about the YOLO neural network.

Trash Panda was made possible thanks to these amazing team members.