So Many Numbers! - Major Update

So Many Numbers has a brand new update, and it's a huge one. From redefining new gameplay features to a complete rewrite, let's get this changelog up and running!

So Many Numbers has a new logo and icon, portraying a more colorful and playful appearance. Above is the logo. Below is the icon.

The new logo and icon better define our vision for the project: an energy-packed math game welcoming to children, adults, and competitive enthusiasts!

The original game generated math problems of all types. While that's fine for most purposes, many of you, including us, wondered how well we'd do with just multiplication. Or addition/subtraction only.

That's why we're thrilled to introduce Sets. On the all-new home screen, you'll find plus, minus, multiply, and divide buttons. Select any set of operators to practice/compete with! Each set has its own high score, so find out your strongest sets, and identify which ones to improve on. 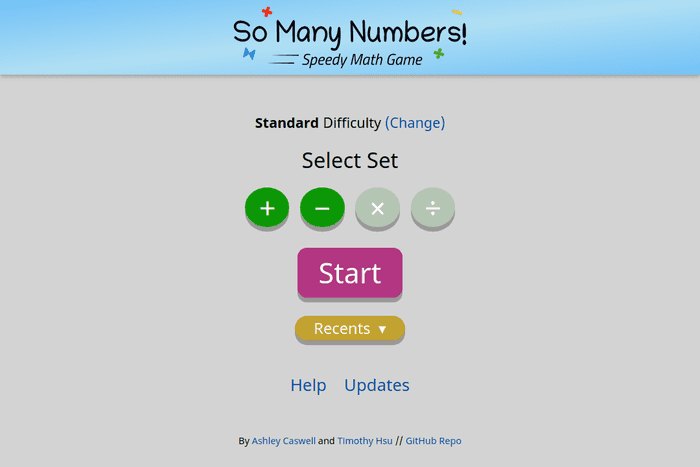 Starting with this release, you can adjust how difficult the math problems will be. We currently offer two difficulties: Simple and Standard.

We intend to release more difficulty options in the future, so let us know what other problem variants you'd like to work with!

Make it an App

So Many Numbers is now a progressive Web app. This means the game fully functions offline, and iOS and Android users can add the game to the home screen so it works like a native app. 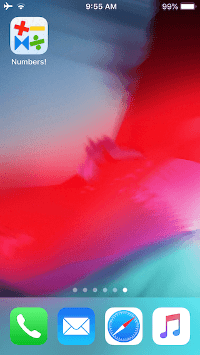 As So Many Numbers expands, it becomes cumbersome to maintain with vanilla JavaScript. Clearly, it was finally time to learn a JavaScript framework. After some hardcore YouTube tutorial watching and Stack Overflow searches, So Many Numbers has a full rewrite with Vue!

The Vue rewrite not only revamps the development workflow; it introduces several user benefits that would have been infeasible before. Here's a few:

(Other JavaScript frameworks/libraries include Angular and React. I chose Vue for this project since it looked easier to grasp.)

So Many Numbers now lives at numbers.gamesbytim.com! The old URL will eventually notify users to switch to this link.

The new domain means that your save data will not transfer. But since the game algorithm changed (no more repeat problems), the old scores are technically null and void anyway.

There's also a new GitHub repository with a fully-written README and a project roadmap.

We'd like to thank everyone who helped test So Many Numbers in the past, including family/friends, the Make School Summer Academy 2018 community, and a third grade after-school math class. Thanks to you guys, So Many Numbers can expand to the state it stands today.