Wheel of Fortune for PowerPoint version 5.0 - an absolute whizbanger

Wheel of Fortune for PowerPoint's largest pain paint has been the score keeping. For years, hosts had to rely on mental math to change player scores, heavily detracting from the actual game. Although previous updates tried to reduce the mental strain, score keeping ultimately remained clunky and unenjoyable.

Well that's all about to change in a flash. Dare I say it, score keeping's actually good now.

It all starts with the new wheel mechanism. Previous versions relied on two clicks to spin the wheel, and its animations got gimped in version 4.0 due to issues with randomness. The new mechanism takes one click, and it spins beautifully. 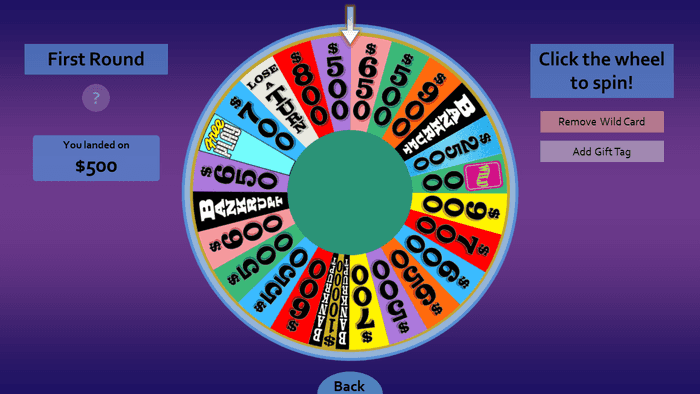 The real attraction is that the wheel tells you where you landed on. For starters, that means no more squinting on the wheel in edge cases. Even better, it's what Wheel of Fortune for PowerPoint needs to keep score for you. 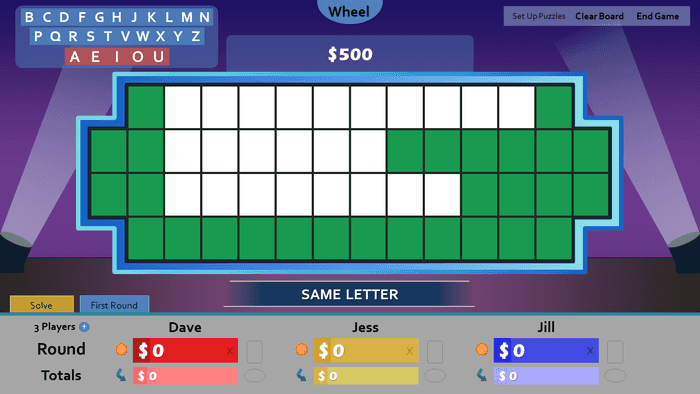 We're back at the puzzle board, which looks a bit different. Gone is the "Wheel of Fortune" button, replaced with an all-new Value Panel. Right now, the value panel holds the wheel value we just spun. Now let's guess a letter. 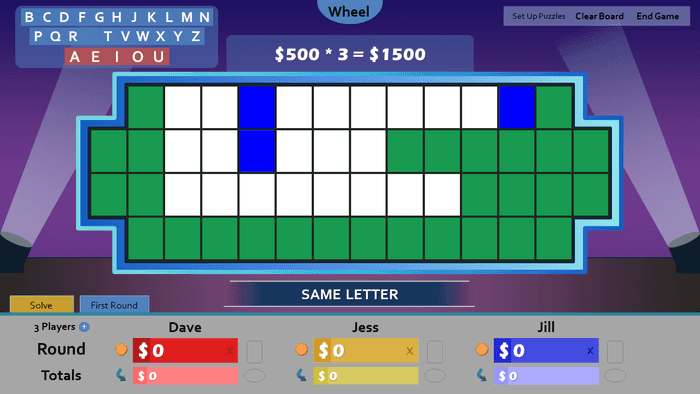 Bam! Three letters in the puzzle, which adds up to $1500. All you have to do now is click on a player's round score to automatically add $1500. It's that simple.

What if you rather not use the built-in wheels and prefer to spin your custom-made wheel? Not a problem. Simply click the Value Panel to manually set the spun wheel value!

How about the Final Spin round, which adds $1000 per consonant? There's a button for that, which takes care of that business.

Hopefully I've convinced you that the Value Panel's a godsend, with its simplicity and top-notch flexibility compared to the competition. But wait, there's more!

The Essence of Sound

The following sound effects are supported:

The included sound effects are custom-sourced, rather than the official tracks, for copyright reasons. You can, should you choose, customize each sound effect in Settings.

By far the most requested feature since day one is the ability to add more players. Starting now, your fourth friend can finally join in the fun! 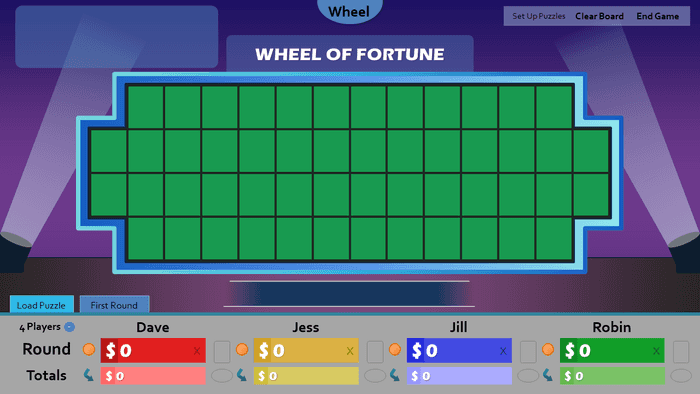 Sure, four players isn't conventional for Wheel of Fortune, but that's why these game show templates have so much potential. We get to address what the actual show won't!

Ever wanted to have more than 12 puzzles for your Wheel of Fortune for PowerPoint game? Now you can. What's the limit? There is none!

Simply click the arrows next to the puzzle numbers to add more puzzles. Make as many puzzles as you want, or until PowerPoint crashes, whichever comes first!

A barrage of settings

Version 5.0 also includes a handful of new settings to fine-tune your Wheel experience.

The following features have been dropped in version 5.0:

As version 5.0 functions differently enough from before, a new video tutorial's in order. Fortunately, I've delivered.

The new video's to the point, shaving more than half the runtime of the previous video!

I remain surprised by how much attention Wheel of Fortune for PowerPoint receives. Thank you all 70,000+ downloaders for your support. You all deserve this amazing update!

Now will this be the final Wheel of Fortune for PowerPoint update? I honestly couldn't tell you, but let's just say I'd like to save some tricks on my sleeve for that glorious web release.